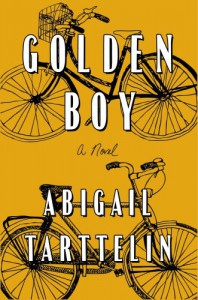 The biggest difficulty with assessing these types of books, that is books focusing on contentious topics such as gay, lesbian, and intersex, is that one may, either subconsciously or unconsciously, apply a totally different set of standards to these books, compared to others he/she has reviewed. That is, given the delicate social and political nature of these topics, one may approach them more gently. I didn’t do this. Not.one.bit.

Golden boy is about Max, a teenager who is intersex. He has two genitalia, a penis and a vagina, however his penis is the most prominent. However, to make matters a bit more confusing, Max’s ‘condition’ is rare, and he has a partially working female reproductive system, and not a functioning male reproduction system. He has a brother, Daniel, who, at the start is ‘age nine and four-fifths’. He is also really freaking annoying. His mother is Karen and his dad is Steve, or Stephen depending on who wants him in bed. Karen is all black and white sorta gal, and vacillates between a position that is sterilized and lawyer like, and one that is more warm and caring, but is really just an echo of her bigger desire to protect her own needs. Steve is a political figure, all masculine and rarely cries, and is so overly laissez-faire about Max’s sexual and gender development that it is grating. Max later has a girlfriend, Sylvie, and there relationship is laced through with tumultuous teenagerness. She is also OBSESSED with his ass, or arse. His doctor is named Archie and she comes with an annoying hero complex. I wanted Max to kill them all.

Max has lead a life filled with a history of servitude, to which I mean he never wants to stir the boat. This gets all things complicated because he is navigating adolescence with two sex organs, and if that wasn’t overwhelming enough he is uncertain as to what gender specific attributes his body will develop.

His life is disrupted when he is raped by a family member; don’t worry it isn’t trite enough to make it his dad, or worse, an uncle. I am pretty sure, but not entirely certain, that it turns out he really isn’t a family member, but this isn’t important. This event totally undermines everything that Max related to, including his gender identity. Not only that, but the mix match between the harrowing event and his docile demeanor scratches up the thin veneer of how he presents himself and who he knows he is, or sorta kinda thinks he knows he is. It also just thrashes his psychological underpinnings to rubbish.

Eventually this becomes not an isolated event, but one that seeps into every corner of his protected, golden boy life. Each system involved, his relationship with his friends, girlfriend, coach, sports, brother, father and mother, and there relationship with each other, is shivved. Soon all of the delicate work done to maintain a ‘normal’ life is gone. We find ourselves going along on the ride as each person tries to shape the crumbled sand castles of his/her life, and ultimately changes to the ways he/she relates to Max. Max is even further in the shitter in digging about the wet sand of his past existence, and with the slow and steady exposure of his ‘truth’ he chances losing everything. Even with honest revelations culminating in him disclosing the truth, poor Max is just further subjected to the harsh reality that the world doesn’t accept things—like gender in this case— that aren’t exclusively binary. This sucks, and Max, unable to escape the clutches of his past coping strategies, falls subject to his own self-hatred and pity. This is annoying. You just want to slap him. There is light somewhere in there, and a resolution that is warm and fuzzy, but it is so goddamn contrived, and the buildup drowned by lengthy explorations on gender and identity, that the reader may (as I did!) ultimately not give a shit. Ok, I gave a little bit of a shit.

The problem with this book is with its topic. As I said before, props to picking a topic that is seldom if ever explored in literature, however, this novelty can’t save a messy and typical format. I expected too much going in, a sort of departure from the typical model often used in books centering on family disruption. This didn’t happen.

This is your very basic outline of a family under pressure, and the satchel filled with books using it is full and its stitching threaded. Max is an otherwise well adjusted child—and I object to the notion that he should be so well adjusted given his circumstances—, who encounters a horrible event, find himself shredded by it, must endure, and somehow, typically ending with a chapter of self-actualizing bullshit, to resolve these issues, but contends that he will ‘always be different’. Ah, life lessons, so powerful and meaningful.

Then we have Daniel. Oh, shitters, this character is a mess. I want you to imagine a toddler combined with Steve from Family Guy. He see-saws from this self-pitying, throws things rather than uses words, annoyingly whiny child, who obsesses about transforming people into cyborgs, plays video games obsessively, pretend plays about things that are mostly video game related, to a child yogi master that says this:

“Yes. Not Yeah”, I tut. “Anyways, I wouldn’t worry about your variation, Max. The statistics about how common intersexuality is are very skewed and they think that the rate of intersexuality now could be as high as four percent. Some cultures register at eight sexes. One in one hundred live births are checked for some sort of ambiguous genitalia. Also, there are over a hundred videos online of hermaphrodite pornography, although, to be honest, I think they are faking it because they don’t look like you. You may be different like me, Max, but the good news is that we’re living in a world of different people.”

“I thought it was inappropriate of you to try and hurt yourself before asking me what I thought about it. If you want to know what I think, I think it would have been absolutely the worst thing in the world if you had died.”

Also his vocabulary, a slew of very large words, is unrealistic. When weighed against Max’s sections, Daniel seems to dwarf Max’s maturity, emotionally and otherwise, as well as Max’s ability to obtain, sequence, and rationalize events. It just isn’t true to a ten year old, and this is where, ultimately, the book falters.

The contrast in parents is also quite cookie cutter. Karen is emotionally distant, but also very clearly able to make rational decisions, while Steve echoes that all too familiar child-focused parental figure that believes a child should evolve and progress as that child sees fit. Problem is these two are such opposites, and that these personalities rarely waver outside of their rigid boundaries, that it feels unrealistic.

Sylvia too, is that character that thinks she is fit to deal with anything, yet no degree of preparedness can support her in dealing with Max’s issues. Her “I think I can I think I can” complex is derivative, and follows the expected ups and downs. She enters, exits, and enters just in time for curtain closing.

Archie is the worst, though, and aside from Max’s various degrees of overwrought self-actualization and speeches on accepting the self for what it is, she is our superman. She swoops in when Max is in trouble post-rape, works diligently to aid in helping max process of the trauma, and then proceeds to regurgitate all this factual information, page after page. I AM NOT suggesting that health related information, or a detailed exploration of sexuality isn’t warranted, but it all to often mimics the same deliriously technical spouting seen in “Suffer All the Children”, which consequently had a doctor in it that did the same thing. With so many characters this information could have been spliced and introduced at a more even, less intrusive way.

Ultimately we have a mosaic of commonly encountered elements, laced together in a very redundant manner, with a unique topic. Yes, the book offers something new as far as subject matter, and there is huge value to that and the influence it will have over popular culture, as well as sources of discussion, but the uniqueness ends with the subject. It was the different character sections that burned this book, and perhaps if they were interwoven it wouldn’t feel so parcellated and controlled, and the characters would have been developed more thoroughly and more originally. A brave foray in a very contentious topic that is often shrouded in misinformation, this book ultimately fails to reach its full potential.