captivating, stunning, and all together a really attractive example of linked shorts done right. 4.5. it deserves a re-read since the frail, gentle connections between the stories were overshadowed by the more overt, forced ones. Simple in prose and calm and succinct in writing style....succulent. did you ever notice the pipe in the mouth of the man, forefront, second to the far right, black top hat in Bal au moulin de la Galette, Montmartr? No? Look again... 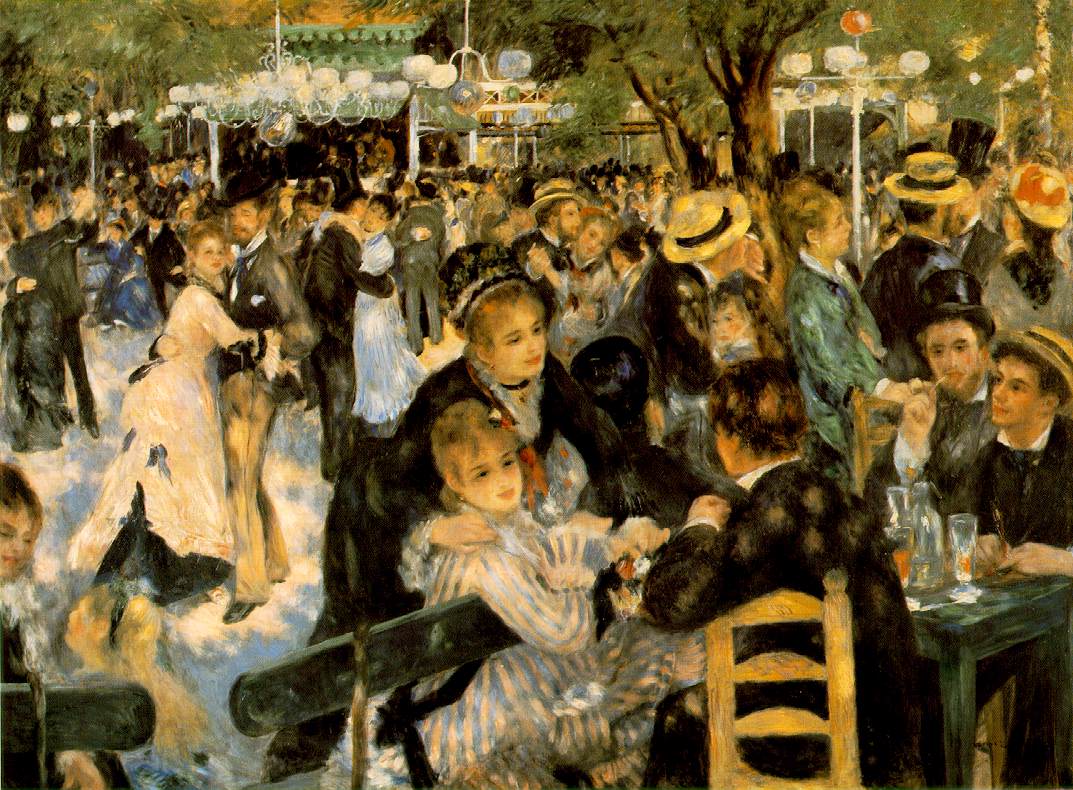 But surely you noticed the two lovers dancing, stolen in a moment, rather large negative space between them and others.... eyes forward. Or the women, stretched lazily over the bench in the nearest the frame?


This is what it is like to read these stories. You can, and you will pay great attention to the larger themes, but as a result you may miss the beautiful rendering of details.

You must be careful to slow down. Cry with the baker. Listen to the rustling of the birds feathers. Sniff the metallic scent of dried blood on leather. Let your fingers slide down broken book binding. Feel the blood course through the tigers chest, the rise in your blood pressure. Turn your head but look out of the corner of your eye at that pale membrane thumping... thumping. Notice the subtle tightness in your nerves, the bees stirring in your chest as you move closer to seeking your revenge, then the release of these feelings, and the vapid hole left in its place..... and the divide between. Let the feeling conjure of the abrupt shift from resentment to hostility. the type of rage that boils, ruptures the defining qualities of self control, and forces steal between ribs, all the way back to rest between T2 and T3....clink... metal on bone. Become the lifeless body... the pulsing of the last bit of blood leaking around steal, seeping between the fingers of your assailant.... Be the observer, as well as the observed.... slowly... and take pause between chapters.


I enjoyed the first two and last two stories the most. There are some gems here, but the connection, those things which are meant to thread these stories together are sometimes too taut, when a looser approach may have been more appropriate. My only disappointment is that the web Ogawa attempted to weave between each story, a back ”back and forth” motion, were, at times a bit more forced and predictable. Some stories go on and on and on, while others end abruptly (not really, you just sit there begging for more... they end quite nicely, actually). But this is the reality of short stories, isn't it?

and fyi, comparing this book to any of haruki murakami's is just plain fraudulent.....

Ogawa enjoys setting the scene, out there, beyond the scope of the characters, beyond your immediate attention. but be warned dear reader, she is careful, and every single word holds meaning. the reader immediately knows that specific clockâ€”its shape, its sound, its faultsâ€”the moment it is mentioned. The movement of things—birds, trees, people—are central here, while pasta and ears are, for the most part absent.