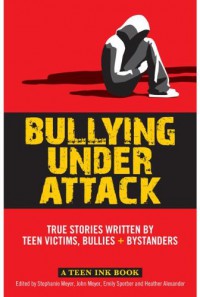 Almost a third of teens, in fact, either are bullies or are bullied, a new study of 16,000 students found.

Adult try so hard to make kids’ lives better. They really do.

Adults, going full throttle, with intentions of compassion, empathy, and a fervid attempt to always comfort, have stressed kids' social emotional and social toolbox. For one, parents and caretakers alike have proclaimed that bullies only hurt others because they themselves are hurting inside. This is a type of blame displacement that is insidious to those who are bullied. It represents the notion that people are not in control of their own behaviors, and to a certain extent implies that the behaviors are ingrained, lessening the prospect that the bullying will abate. Another aspect posited by one of the authors in this collection, is that "[by suggesting this to a victim] we’re hoping to raise the victim up by bringing the bully down”; she then proceeds to call this hypocritical. Excuses for bullying, displacement of behavior, and rationalizations are part of the recursive cycle that perpetrates and sustains bullying. How are we supporting those who are bullied if we attempt to rationalize the behaviors of those who torment? Children pull from the words of their older counterparts for strength and guidance, and when left with ill-conceived notions and philosophical statements, flounder. What is a 10 year old suppose to do with the idea that a bully hurts others as a direct result of their own hurt? Are we so detached as adults that we don’t recognize the potential for this to induce further injustices and unfavorable results? Is it not completely rational, as ‘Emma’ wisely stated above, that these words could birth more bullying?

Adults have exacted further pains and anguishes onto children with misguided approaches to bullying that shadow the present trauma endured by children, in light of the prospect of ‘a better future’. The ‘It Gets Better Campaign’—a program that is greatly explored throughout this collection—is a prime example of such efforts. Yes, this platform openly discusses bullying using the unique medium of video recording. Yes, it has the capacity to pull together the shattered remnants of a bullied child’s self esteem; at least enough to get him/her through a few more days of torture. But is it really the message we want to give to children? ‘Hey, I know you are hurting but when you leave middle school high school will be better’ What do we say if it continues? ‘John I know I told you it would get better in high school, but believe me it does get better…. college will be a whole new world’.


I won’t argue against the utility of these videos. I will argue that it is a limited phenomenon.  It is exclusive to situations where the culture and social structure, either at home, school or both, provide support. I will argue that all to often situations where mental health is not emphasized, teachers and parents are not coach in empirically evidenced anti-bully strategies, or various social constraints—lack of funding in schools that decreases teacher populations and increases student numbers, situations where pluralistic thinking pervades social attitudes, a lack of cultural diversity, among other factors—have a deleterious effect on resolving these issues and on levels of resiliency. Conversely, there are social and cultural structures that are completely opposite to the one illustrated above, and thus these efforts do serve some populations. I will argue that these situations are rare compared to the bulk of children bullied in schools. I once new of a kid in my high school that was tortured— yes I did nothing. Me = (past tense) bystander— to the extent that he took a Ping-Pong paddle to his abusers forehead; he was punished, even though he reported time and time again of his pains and sorrows. Why are we preaching narratives of hope naked of key elements such as survival, resilience, courage, and a deep, complex understanding of each? Stories like this are threaded throughout this collection, as are discussions expressing many of the ideas explored above.

“Behind many of these accounts are themes of overcoming homophobia or transphobia by fleeing towards new people or places. Yet this possibility of movement is also a privilege. What about those who cannot escape their bullying”?

In the end the message is, as Sarah Hamel noted, “sticks and stones many break my bones, but words will eventually stop hurting me after I get used to them”. This counters the adult world, a world we take for granted compared to the world we pretend teenagers live in. “If someone were to call a coworker a “fat whale”, they would be fired or at least face serious discipline. Why isn’t this true for our schools?”, Elizabeth Ditty wisely questions.

Unfortunately these stories are plagued with these narratives; sometimes overtly sometimes with just subtle undercurrents. Story after story indicate apathy and disrupted resiliency as a direct result of what we, as adults, have engrained in them.

Many of these accounts demonstrate the consequences of enduring sustained physical assaults and verbal abuse. The psychological punch depicted by Gwen:

“[…] but nothing changed. So I intentionally failed two classes that I had excelled in, […] and stopped doing homework”

Countless stories cited instances of first hand accounts and those mentioned in the media, of youth pushed to their braking point and as a result committing suicide.

I think the real message of this book represents concrete cultural and social shift instigated by the wise wisdom of youth. They are witnesses. They are bystanders. They are victims. And they are bullies. We need to respect these first-hand accounts, and as one writer points out, embrace the notion that outsiders only get a glimpse of what really occurs in these situations. Within these stories are noble and honorable attempts to curb bullying. In one story an outcast—I hate this word as it suggests permanency—was assaulted by spitballs. A popular peer turned to the bullies and said “Guys […] that’s not cool. Stop it”. Another teen on a lower level of the social ranks raised her voice, knowing full well of the implications of her opposition, saying “It’s kind of jerky”. We really have to applaud these teenagers, teens like ‘Sharon’ and the unnamed male. They consciously disregard the negative implications of their statements, pull back from social rules, and denounce the ignorance of their older counterparts.

These stories establish their credibility of the subject of bullying and their subjective awareness of their lives; this demands adults’ acknowledgement and respect. I reject the promise of a better future absent of a better now, and the apathy it bequests onto youth, as do many of the authors of these stories. I vehemently object to the notion that the trauma one endures is a source of strength, and that it has the capacity to make the victims advocates for victims. They will embody the same lessons if we nourish children with empathy, respect, understanding, and a belief system that radically changes the concept of it WILL get better, to it WILL get better NOW. These stories literally scream these views.

The cultural and social shifts represented in these stories don’t have to remain exclusive to youth. There is full potential for global, systematic change, as long as we stop preaching and start listening; really listening.

http://www.nea.org/home/Bullyfree-Take-the-Pledge.html
NEA’s Bully Free: It Starts With YOU the parent/educator/coach/ally/sister/brother etc


http://www.bully-buster.com/anti-bullying-solutions.php What about using technology to disrupt bullying?